The Move Everyone Loves to Hate: The Push-Up CT Personal Trainer 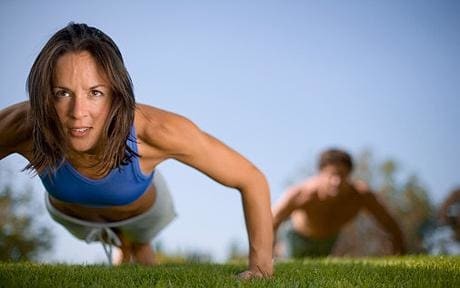 A list and discussion about the push-up by CT Personal Trainer, Cameron F.

Who can not deny that the push-up is one exercise everyone loves to hate? Push-ups are a popular calisthenic move that needs a little more love these days. Today we will go over this move in depth, and even into some interesting facts that not everyone may know. Let’s get our chests ready, and let’s start pushing through this bad boy.

While it is unclear as to the exact origins of this exercise, known variations have been in existence for centuries. For instance, the dand, or hindu pushup, is thought to owe its origin to the Zoroastrian practice of genuflecting to the sun, the supreme flame. It could also be considered an amaglgamation of two popular yoga poses (asana), the downward dog (Adho Mukha Svanasana) and the upward dog (Urdhva Mukha Svanasana). Yoga’s roots can be traced back at least 3000 years. We would have to fast forward to the year 1905 before the American term of Push-Up came around.

What muscles does this great exercise work? The pushup primarily utilizes the pectorals and the triceps, though other muscles that are involved are the anterior deltoids, serratus anterior, subscapularis, and the coracobrachialis. These work dynamically, shortening to push the person away from the ground, and eccentrically as they lengthen in response to tension in their antagonists to lower to the ground. Stabilizers include wrist and forearm muscles, the knee extensors, and the hip/spine flexors which all work isometrically to maintain a proper plank position in the standard prone pushup.

Push ups are normally done with a flat palm. They can also be done on the knuckle, fingerpads, fingertips, or with a close fist on the fingernails.

For close-grip pushups, the hands are brought together in the center and either placed right next to each other so as to form a “diamond” shape between the connecting thumbs and forefingers, or the hands are over-lapping.

For these pushups, rather than having the hands in line with each other, perpendicular to the torso and legs, the hands are placed with one farther forward and the other farther back. This alters the stress on each arm, giving a new stimulus.

A plyometric pushup–one that seeks to increase power–is done by exploding from the bottom of the movement as hard as possible so that the hands are lifted off the ground at the top of the movement. Many people call these clapping pushups. The clap is optional. A small amount of controversy surrounds whether or not these are actually plyometric, however the very definition of plyometric explains that they would fall into that category.

Another variation is the drop push, where two platforms are placed on either side of the subject. The exercise begins with the hands on either platform supporting the body. The subject then drops to the ground and explosively rebounds with a push up, extending the torso and arms completely off the ground and resetting the hands to the starting position, with both hands on the platforms.

Many people increase the challenge of the conventional pushup by propping their feet up on something. This makes the pushup more difficult. The opposite of this is to elevate the hands which makes them easier.

Foot elevation alters the angle and shifts emphasis from the lower pectoralis major to the upper clavicular fibers of the pec as well as the anterior deltoid. It also shifts more overall weight onto the hands, resulting in greater elbow extensor work.

In addition to putting the hands or feet on a raised platform to switch the angle, either of them can be placed against a wall.

It is possible to mimic the change in angle without shifting more weight onto the hands via foot elevation, via raising the hips and scooting the feet in closer.

This most difficult variation shifts 100% of the body’s weight onto the hands. The scapular movement changes from protraction to upward rotation and elevation. The shoulder movement changes from transverse flexion/adduction to abduction/flexion. With perfect form, the pectoral muscles are barely utilizes as the predominant brunt across the glenohumeral joint is taken by the anterior deltoid muscles and somewhat by the medial deltoid and clavicular portion of the upper pectoral.

Beyond the strength requirements, this is a difficult variation to stabilize. Many people tilt their legs against a wall for stability, though this can make pushing up harder due to the friction of moving feet unless someone bends their legs.

It is possible to avoid taking weight off, and even add some, by doing a handstand under a low ceiling. By pressing the feet against the ceiling, one stabilizes and prevents from falling over, and rather than subtracting weight, actually supports some of the ceiling’s weight and adds additional difficulty to their hands.

Jackknives are done with hips (and possible spine) flexed to decrease the distance between the hands and feet. It inverts the torso and shifts muscular work towards the front deltoids. This is a lower resistance means of training for things like handstand pushups.

The Hindu pushup is a variation that takes it name from the wide popularity among Indian wrestlers and Indian martial arts styles, such as Pehlwani. Bruce Lee performed these and called them dands. They are widely advocated by Matt Furey.

It utilizes a jack-knifing motion; the starting position consists of the hands and feet spread apart with the body bent at the hip–the buttucks will be in the air. The head and body are then lowered by the arms eccentrically in a means identical to a jackknife pushup.

At this point it differs, because rather than reversing the motion, a second concentric aspect is added. In a swooping motion the back is arched (hyperextended) and the hips are extended until the pelvis is nearly touching the floor. Both the elbow and shoulder joints extend. The head and torso end up in a cobra-like position.

From this point, the elbows remain locked and the shoulders extend and the spine and hips flex until the user returns to the original jackknife position.

By doing this, users avoid the concentric stress (which is more difficult) experienced by people who press up using their arms in either a jackknife or a dive bomber.

As a CT Personal Trainer I say trying out different Variations will provide a different feel for the move, and challenge you in different ways!

Cameron is a leading success coach and personal trainer at Horizon Personal Training in CT. Cameron is a NASM Certified Personal Trainer and keeps up to date on the latest fitness trends to ensure success within one’s self! To learn more about Cameron please go to www.horizonpersonaltraining.com.